Step Step is a scary story about a boy who hears strange noises while playing a game of hide and seek.

When I was a kid my parents would sometimes bring me down to my aunt and uncle’s place to stay for the weekend. Mainly I’d spend the time playing with my two cousins, who were around the same age as me. They lived on a small farm with plenty of open space, and we could run around doing pretty much whatever we wanted.

If we thought we could get away with it, the three of us would sometimes cross over to the neighboring farm about half a mile away. It had been abandoned for decades, with a scattering of derelict buildings and other structures still standing on the property, just begging to be explored. 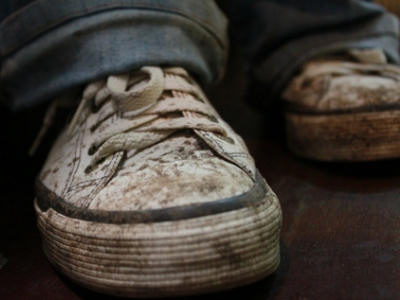 This was, of course, a goldmine for three adventurous young boys such as ourselves, especially after my cousins told me stories about how the place was haunted. It was pretty classic fare – man goes crazy, axe murders his entire family, hangs himself, returns every night as an angry spirit looking for new victims. Good, grisly stuff.

Even at that age I knew they were probably making it up, or at least embellishing old rumors. But seeing as how the setting lent itself so well to such tales, I allowed myself to buy into it.

One afternoon we decided to play hide-and-seek. When it was my turn to hide, I ran off for a flimsy brown barn that had living quarters on top, and climbed the stairs looking for a good spot. There was still furniture inside, musty and rotting, and personal belongings lay scattered across the floor. I maneuvered over broken dishes, tattered clothes, and crumbling books, eventually coming to a small bedroom with a closet.

There were even long black dresses still hanging on the rod that I could hide behind. I stepped inside and managed to force shut the folding door. My only illumination was a slit of sunlight that shone through the crack in the door from a nearby window. I crouched down with knees tucked into chest and waited.

Some time passed, and there was still no sign of my seekers. I waited some more, debating if and when I should give myself up. After nearly an hour, this was starting to get boring. My head drooped.

I awoke with a jerk.

It was pitch-black. Drowsy and confused, I forgot for a minute where I was or what I’d been doing. As it slowly came back to me, the realization that it was now night, and that I had been abandoned here, filled me with a sinking dread in the pit of my stomach. I tried to get up but a sudden cramp in my calf kept me grounded. I squirmed about, waiting for it to pass when I heard a door slamming shut downstairs, and instantly froze.

Was it one of my cousins?

There was a brief period of silence, then footsteps at the bottom of the stairs. But not just footsteps. A thud too, after every other step. These weren’t the footfalls of a child. They were slow, heavy and deliberate.

I held my breath, praying they would go away. They did not. The noises continued to ascend until they reached the top of the staircase.

After another moment of silence the walking resumed, this time along with a steady scraping sound, like something heavy being dragged across the floorboards.

The footsteps made their way through the debris and wandered aimlessly through various rooms. I thought I could smell something faintly putrid. The constant scrape sent cold shivers coursing down my arms and back. My worst fears were realized when the steps reached the bedroom doorway.

They got closer and closer, and finally stopped directly in front of the closet door. I couldn’t see a thing. After an agonizing pause they continued on, over to the other side of the room and out the doorway again. They faded away down the hallway.

I waited for what seemed like an eternity. There were no more sounds now, and I was trying to build up enough courage to open the door and flee. Three things happened simultaneously just then: I was bombarded with a smell I can only describe as fresh roadkill. I heard raspy breathing behind me in the dark closet. And I felt hot breath against the nape of my neck.

That was enough for me to hurl myself out of the confines of that nightmarish space, relying on memory and scant moonlight to navigate through the darkened house. All the while I heard footsteps chasing behind me, closing in with terrifying speed.

It was a clumsy, tortuous escape, full of trips and bumps and blind stumbling. I never looked back, at least not until I had burst out the front door and into the country night. And when I did turn around, I saw…

There were no more footsteps, and nobody was chasing me. That didn’t stop me from running though, all the way back to my aunt and uncle’s house. There was a police car in the driveway when I got back. My parents were there too, worried sick. Everybody demanded to know where I’d been.

Apparently, when my cousins still hadn’t found me by evening, they’d returned home to tell their parents. Eventually the police were called in, and informed me they had already scoured every building on the farm. The insinuation that I was lying about my whereabouts didn’t go unnoticed. None of it made any sense.

It wasn’t until years later that one of my cousins filled in a final piece of the story. He and his brother had spent hours searching for me, like they said. But the part they didn’t tell anyone was that they thought they spotted me in the window of the bedroom I was hiding in. When they got closer they saw that it wasn’t me.

A young boy neither of them recognized was smiling and waving down at them, and gesturing for them to come upstairs.

That’s when they ran back home.

All this, while I was asleep in the closet.