Nobody is a strange and spooky story about an old man who is scared while he walks home one night. 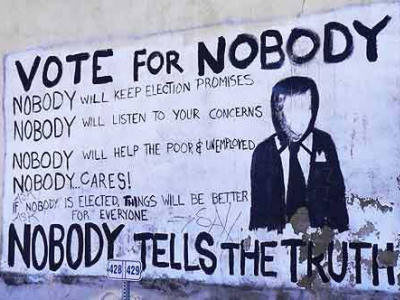 There was an old man who was an alcoholic. Every morning, when the local bar opened, he would go inside and order a drink. He would not emerge until closing time, drunk and disoriented. Then, he would stagger home and fall into bed.

One rainy, windy night, the old man was on his way home and decided to take a short cut through an alley. A gust of wind blew a tile off a roof just as he was walking by. The tile hit him on the head and smashed into tiny pieces.

The man was knocked to the ground. As he struggled to his feet, clutching his aching head, he looked up.

“Who did that?” he asked out loud.

The wind whistled through the alley and he thought he heard a faint voice whisper, “Nobody.”

The man turned around quickly. The alley was dark and deserted. Nobody was there.

“Who said that?” he demanded.

The old man continued down the alley, craning his neck and looking around him furtively. Shadows flickered across the stone walls.

His pace quickened and fear gripped his heart. He had the sneaking feeling that somebody was following him. A chill went down his spine and he began to run. Suddenly, he slipped on something, stumbled and fell to his knees.

“Who tripped me?” he cried.

Through the wind and the rain, he thought he could hear somebody breathing heavily. The sounds seemed to be very close. He scrambled to his feet and shouted, “Keep away from me! Don’t come near!”

Nobody listened to his cries.

Desperately, the old man felt around in the darkness. His hand came across a piece of wood lying on the ground. It was thick and heavy and had a long, rusty nail sticking out of it. Picking it up, he started swinging it back and forth.

He lashed out at the darkness, using the length of wood like a club. He accidentally swung the piece of wood too hard and hit himself in the head. The force of the blow drove the rusty nail right into his brain and killed him.

The next day, two policemen were walking their beat, when they came across the dead body of the old man, lying in the gutter.

“Who would have killed him?” asked one of the policemen, thinking out loud.

The wind whistled through the alley and he thought he heard a faint voice whisper, “Nobody.”