Old Man Jenkins is a character from Spongebob and Scooby Doo. It’s also the name used to describe the character who gets unmasked as the stock villain in every kids’ mystery show. The kids capture the monster, pull off the mask and go “Look! It was Old Man Jenkins all along!” 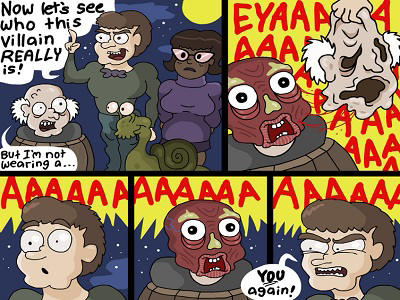 The Return of Old Man Jenkins is a stupid story I found on the Internet which was probably written by some kid for a class assignment. It falls into the so-bad-its-good category.

The Return of Old Man Jenkins

Once upon a time were three boys named Kyle, Brad and Duncan. It was Halloween night and they had lots of candy. They went to the last house on the block and it was the scariest house ever. They knocked on the door but it opened by itself. They went inside. Then a scary thing happened.

Kyle picked up something. It was all soft and squishy.

“I’m scared”, said Brad. Then he tripped on something. He picked it up.

“What’s this”, he wondered aloud. The other boys just shrugged.

“Well it feels really soft and squishy like a brain when it bounced onto the ground”, he said.

“I think this is Old Man Jenkins’ house”, said Brad.

“They say that this place is haunted”, said Brad.

Then, all of a sudden, Kyle saw something peek out of the corner.

Then a shadow ran fast right in front of them.

Then the lights went on. They all quickly turned to the light switch, and there, right in the corner, was Old Man Jenkins.

But then Kyle heard his Dad’s voice calling him and it sounded close by. They looked around and there, at the doorway, was Kyle’s Dad.

“But… But what about the brain and the eyeball?” they said.

“They were just meatballs and meat”, said Kyle’s Dad.

Then Kyle ran to his dad and tried to jump on him, but Kyle jumped through him instead. He tried again and again but he kept jumping through him.

But Kyle couldn’t come here. Because Kyle’s Dad was a ghost.

The Revenge of Old Man Jenkins

How about I tell you the story of Old Man Jenkins? Legend has it that he lived alone in an old, run-down house on the edge of town, where the wind never seemed to stop howling and the sky was always dark. He was a mean old man and hated kids. No one liked him.

One Halloween night, some children decided to play a trick on Old Man Jenkins. There were 3 kids, 2 boys and 1 girl. They got dressed up in super scary Halloween costumes. One boy was dressed as a demon, the other boy was wearing a vampire costume and the girl made herself up as an undead creature.

They walked up to the door of Old Man Jenkins’ house and knocked loudly. The door slowly creaked open and it seemed as if no one was home. They peeked inside. It was dark and quiet and a bug crawled across the floor.

When they walked inside, the door slammed shut behind them. The children screamed. Suddenly, Old Man Jenkins emerged out of the shadows, but something was wrong. The flesh was dripping off his face. Blood was dripping from his body and his clothes were ripped and dirty. One of his eyes was badly swollen and his mouth was twisted in an ugly sneer.

“What are you doing in my house?” he boomed.

The children cowered by the door.

Old Man Jenkins began to laugh and laugh and laugh. As his laughter got louder, he began to fall apart. His eyes fell from their sockets, his fingers fell from his hands. Old Man Jenkins crumpled to the floor in a heap and roaches and bugs of all kinds emerged from his body. They crawled up the walls, over the ceiling and across the floor. The bugs began to crawl toward the children.

The terrified kids grabbed at the door, screaming and trying to open it. Tears were streaming down their faces, but the door wouldn’t budge.

No one ever heard from the children or Old Man Jenkins again.