Evil in the Woods

The Evil in the Woods is a true scary story about a young Native American boy who has a frightening encounter while driving home one night. It is a real incident that happened to a user named navajojoe when he was just a child. 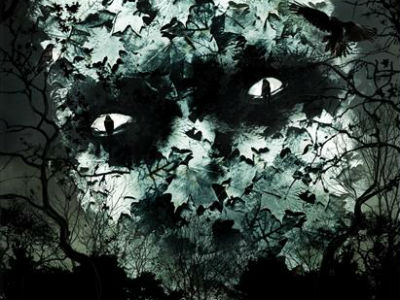 It was a cold December night and I was just a kid. The stack of firewood was nearing the bottom and my grandmother knew it wouldn’t last till morning. She asked my Uncle to fetch some more from the mountains. My uncle took me with him and we drove off in his pick-up truck.

He chopped the wood and I stacked it as fast I could. By the time we finished, the sun was setting and the bed of the pick-up truck was half full.

On the way home, the sun disappeared from the sky and it grew very dark. We were driving down a dirt road that led through the woods. I leaned my head against the window and watched the silhouettes of the trees race past as the stars twinkled above them.

All of a sudden, I got the awful feeling that we were being watched. The hair on the back of my neck stood up and a chill ran down my spine. My uncle had a strange look on his face and he was staring directly ahead.

Just then, I heard a tap tap tap on the window behind me.

I started to turn around, but my uncle suddenly shouted, “Don’t!”

I completely froze. My heart started beating rapidly. My uncle put his foot down on the accelerator and we began to speed up. It was the first time I had ever seen real fear on my uncle’s face.

I heard another tap tap tap on the window beside me.

“Look at me!” my uncle shouted. “Don’t turn around! Keep looking at me!”

I didn’t know what was going on. My mind was racing.

All of a sudden, I felt the truck dip as if something heavy had landed in the back.

My uncle sped up even more and started praying loudly in our native language.

I wanted to cry. I wanted it to stop.

Once again, I heard a tap tap tap on the window behind me.

“Just keep looking at me and don’t turn away!” my uncle cried over and over.

I could see he was on the verge of tears. He was driving faster and faster, pushing the engine to its limits.

My heart was beating so rapidly, I thought it would leap out of my chest. It was getting harder for me to breathe. I shut my eyes as tight as I could and whispered a prayer.

A minute or two passed and then the truck dipped again.

My Uncle looked around and let out a deep sigh of relief. He slowed down and everything was quiet again. All I could hear was the drone of the truck’s engine and the crunch of the gravel on the dirt road.

My uncle looked at me and said, “We will have your Father do a prayer in the morning so the evil will forget our faces.”

I remember curling up on the seat and just staring at the clock on the dashboard as I listened to my uncle sing an old prayer. By the time we got back to my grandmother’s house, I was almost asleep. My uncle carried me inside and put me to bed.

To this day, my uncle has never talked about what happened that night.