Bella is a creepy ghost story about a little girl who has an imaginary friend. 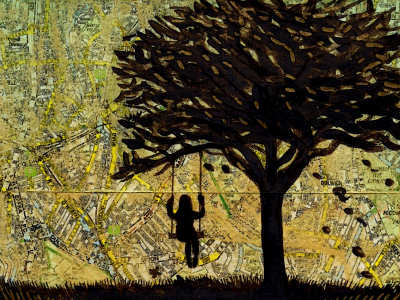 There was a six-year old girl named Cassandra who was very shy and quiet. She never played with the other children and preferred the company of her dolls. When her parents decided to move to a new town, the little girl didn’t find it hard to say goodbye to her old neighborhood and school.

Her parents were concerned about the change, but they hoped that eventually their daughter would end up enjoying their new home. It was an old mansion that had a large garden. Cassandra quickly got used to her new surroundings, but there were no other children her age in the area. Having nobody to play with, she became even more withdrawn and lonely.

There was an old elm tree in the garden and Cassandra’s father built her a tree house. She would take her dolls up to the tree house and spend hours there alone.

As the days passed, the little girl’s behavior became increasingly bizarre. She hardly even spoke to her parents and spent every moment hidden away in her tree house. Her worried parents listened to her talking to herself for hours.

When they asked her who she was talking to, she told her parents she had an imaginary friend named Bella. Her parents didn’t give it much thought because they knew that, at that age, it was common for children to have imaginary friends.

At night, the little girl would be plagued by strange dreams and she would often cry out in her sleep. One night, Cassandra’s mother heard footsteps in the hallway. Fearing it was a burglar, she woke her husband and begged him to go and see what was going on. He found Cassandra wandering aimlessly around the house.

She seemed to be sleepwalking, but the disturbing thing was that her eyes were wide open and rolled back in her head. When her father called her name, Cassandra woke up totally dazed and confused, not knowing where she was.

Cassandra’s behavior became even more strange and at night, her parents would find her wandering further and further away from her room. They were afraid that the little girl might wander out into the street one night and get hit by a car.

They decided to take her to a sleep clinic where they could monitor her strange sleep disorder and treat her sleepwalking. But after spending two nights at the clinic, nothing unusual was detected. In fact, Cassandra slept soundly all through the night.

They took her to a psychologist, but he wasn’t able to help either. He just confirmed what the parents already knew, that their daughter had an imaginary friend named Bella. The psychologist told them it was relatively common, especially since the little girl had no friends. He advised them to stop her spending so much time alone and to try to introduce her to other children her age.

The parents followed the instructions of the psychologist and forced Cassandra to spend more time with them. They only allowed her to go into the tree house for one hour a day, but when she did, she still talked to her imaginary friend, Bella.

The girl’s sleepwalking began to get worse and her nightmares seemed to grow more intense. On a few occasions, her father found her out in the garden, wandering around in the middle of the night. During the day, Cassandra seemed increasingly exhausted and sickly.

One night, her father woke up and heard someone climbing down the stairs. When he checked, he found his daughter opening the back door and going out into the garden. Her eyes were rolled back in her head. He decided not to wake her and followed her instead.

She opened the garden shed and took out an axe. When her father saw this, it sent a chill down his spine. He watched as his daughter started walking towards the treehouse.

When she got to the tree, Cassandra crouched beside it and began babbling something her father could not understand. The little girl lifted the axe in her tiny hands and started to hack at the tree. Her father approached cautiously and heard her mumbling, “I have to get out of here!”

“Cassandra, wake up,” her father said.

The little girl paid no attention. As her father watched, she struggled to keep chopping at the tree. Her little body was shivering with the cold, but she still seemed unable wake up. The father did not know what to do.

“Bella, is that you?” her father croaked.

The girl turned and stared at him. Her eyes seemed to be pleading for help. A few seconds later, she fainted. He picked her up and carried her back to bed. When he tucked her in, the little girl instantly opened her eyes again. Her ​​body was shaking and she looked all around her as if she was trying to understand where she was.

The next morning, at dawn, the father went out to the garden and picked up the axe. Standing beside the tree, he felt a cold chill run down his spine. He wanted to put an end to the problem once and for all. He swung the axe and struck the tree as hard as he could. He kept chopping until the bark came away and the wood shattered, revealing that the tree was hollow inside.

He peered into the jagged hole and something white caught his attention. When he reached in and grabbed it, he was horrified to discover that it was a human skull. He ran back to the house and told his wife to call the police.

Less than twenty minutes later, a police car and a coroner arrived and removed a whole skeleton from the tree. After further investigation, they determined it was the remains of an 18-year old girl who had lived in the town. She had disappeared a couple of years before and nobody knew what happened to her. The girl’s name was Bella.

The police also determined that she had been murdered. Her skull was caved in with a blunt instrument. They arrested the previous owner of the house and faced with evidence of his guilt, he made a full confession. He said he had killed the girl and hidden her remains in his garden, thinking that no one would ever find her.

After the remains were buried, Cassandra never spoke to her imaginary friend again. It appeared that after the mystery of Bella’s disappearance was unravelled and her murderer was arrested, her spirit was finally able to rest.

Note: This story was inspired by a real unsolved mystery that happened in England in 1943. Four teenage boys were looking for birds’ eggs when they happened to peer into a hollow tree. Inside, they discovered the skeletal remains of a woman. The police investigated, but they could never find out who the woman was or why she had been put inside the tree. Shortly afterwards, graffiti began appearing on walls all over town asking “Who Put Bella in the Wych Elm?” There were numerous theories about what happened, ranging from witchcraft and devil worship to a wartime spy ring, but today the mystery still remains unsolved.