Water, Water Everywhere is a scary story about a group of young teenagers who find an underwater cave at a swimming hole. 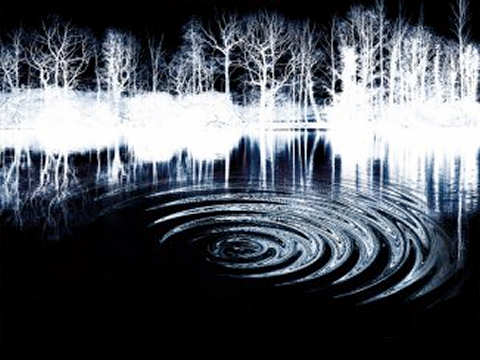 “Last one in has to swim the hole!” shouted Cory.

The four boys and two girls followed him as he raced across the field that sloped down to the swimming hole. Cory reached the edge first. He grabbed the rope they had tied to a branch of a tree and swung himself way out into the middle of the pond. Then he let go of the rope and dropped in. Brandon and Wendy dived in next, followed by Warren, Kelly, and Cliff. Mel tripped and fell on the way, so he was the last one in.

“Mel has to swim the hole!” shouted Brandon.

He jumped into the water and swam over to the far side of the swimming hole. There was a deep cave underneath the surface and the object of the game was to swim down into it. They called it “swimming the hole”.
Inside, it was pitch-black and very eerie. Cory had placed a little ceramic figurine down there one day. You had to feel around in the darkness and grab this little statue. You weren’t allowed to come back up until you had it. Then you had swim down again and put it back for the next person.

Mel took a few deep breaths, ducked under the surface and quickly disappeared. The other kids gathered around the hole and waited.

“I think this water’s getting dirtier,” said Kelly. “Remember when we could see the bottom? Now I can’t see a thing!”

“It hasn’t been that long,” said Brandon. Has it?”

For a moment, none of them said anything, but as the silence grew, so did their uneasiness.

“Do you think something’s happened to him?” asked Kelly in a quiet voice.

“Maybe one of us should swim in,” suggested Wendy. “He could be stuck or something.”

Just then, Mel’s body suddenly rose into view from the murky water. All six of the other kids let out terrified screams. His eyes were bulging out like Ping-Pong balls, and his face was purple and bloated.

They splashed around in the water in a frantic attempt to get back to the opposite shore. Each child tried to put as much distance as possible between themselves and the hideous dead body of their friend.

Cory pulled himself up on the grass and looked back. Cliff was laying on the bank crying. Warren was close to the shore, but Brandon had stopped a few feet away and was treading water. He was shouting and tugging at his sister, who was floating and yelling at Kelly. Kelly was holding onto a bush that hung over the hole. She was staring at Mel’s body and didn’t seem to hear Wendy calling her. She just stared at the body, gently pushing it away when it nudged up against her.

Warren pulled himself ashore and turned to watch. “Come on, Kelly!” he shouted. “Time to go!”

Kelly looked over at her friends, as if she was in a daze. All of a sudden, two watery tentacles shot out of the water and wrapped around her. She was suddenly yanked under the water.

Wendy screamed and Brandon pulled her by the arm. Cory’s mouth hung open in shock. Then, Kelly’s body shot into the air. She was held around the neck and waist by two tentacles that looked as if they were made out of water! Kelly was trying to breathe, but one of the tentacles wound itself around her neck and strangled her. The thing smacked her against the surface of the water, and then dragged her under once again.

Cory’s feet seemed rooted to the spot. He dimly heard the others screaming, but it wasn’t until he saw Warren try to hit the thing with a tree branch that his paralysis broke. He raced over to help Brandon and Wendy out of the water. Kelly fought her way back to the surface one last time. There was a sound like branches snapping as the tentacles pulled tight and crushed all the bones in her body. Then, her limp corpse was dragged back under the water.

“Come on!” Cory sobbed, grabbing at his arm.

“What else can we do?” yelled Brandon. He pulled at Wendy, who was sobbing hysterically.

“We have to get help!” Cory shouted.

The kids ran to the nearest house and called the police. Soon the river bank was swarming with adults. The police and the fire department arrived, but they couldn’t find any bodies. The water was too murky, so a boat was brought down and they started to drag the bottom.

The other kids were interrogated for most of the day. They soon realized that no one was ever going to believe them. Finally, after hours of being questioned by the police, they were allowed to go home with their parents.

That night, Cory was feeling sick to his stomach. He didn’t say a word during dinner. All he could see in his mind’s eye was Mel’s bloated body. All he could hear was the sickening crunch of Kelly’s bones.

After dinner, he went to his room and lay on the bed, running the memories over and over again until he couldn’t bear them. All of a sudden, he sat up in his bed, staring at the wall.

He jumped off the bed and raced downstairs. Grabbing the phone, he frantically dialed Brandon’s number. It was busy. Frustrated, he slammed the receiver down, then snatched it up again, and dialed Cliff’s number. Cliff’s mother answered on the third ring.

“What? Cory, what are you talking about?”

Cory was talking so fast, he could barely understand himself. “It’s a water monster, Mrs. Powell. Made out of water. And the stream runs through the sewer system and the water monster could go anywhere and it knows that we’ve seen it and—”

“Cory!” Cliff’s mother snapped. “This isn’t funny. Now I know that you’ve had a horrible experience, but I don’t think its very nice of you to call up and try to scare Cliff anymore than he already—”

Her lecture was cut short by a terrible scream from the bathroom, and Cory heard the phone clunk against something as Mrs. Powell dropped it. Cory’s chest was heaving, and he felt as if he were going to throw up.
Staggering, he made his way to the kitchen. His mother was washing dishes while his father cleared the table.

Cory was about to answer when something swelled in the soapy water in the sink. His mother screamed as two long tentacles shot out and wrapped around her, pulling her down into the drain.