FacebookTwitterPinterestGoogle+RedditWhatsApp
Tell Me Your Story

Valentine Message is a spooky story written by a member of this website named iscareyoutodeath in collaboration with ScaryForKids. It’s about a teenage girl who starts receiving disturbing messages on Facebook from someone who wants to be her Valentine. 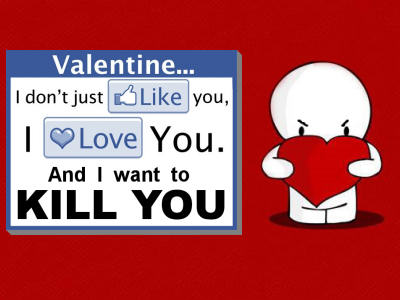 Stephanie was a normal, happy teenager who was very popular in school. She was the prettiest girl in the 11th grade and every guy wanted to date her. However, at the age of 16, Stephanie had no experience with boys. She felt that she just wasn’t ready to have a boyfriend and hadn’t even experienced her first kiss.

One day, at the start of February, Stephanie was checking her Facebook account when she received a message from somebody she didn’t know. It was a user who went by the name of WhoAmI and he had no photos of himself on his profile, just a picture of a red rose next to a heart-shaped box of chocolates.

The message read: “Stephanie, will you be my Valentine?”

Stephanie was a little creeped out. She had no idea who he was, so she just replied, “No thanks!” and logged off.

A few days later, she got another message from the mysterious user.

It read: “Stephanie, I like you. Please be my Valentine.”

Stephanie decided that the best thing to do was not reply. She didn’t want to encourage him, so she just deleted the message and tried to put it out of her mind. However, when Valentine’s Day arrived, Stephanie checked her Facebook account and found another message waiting for her.

It read: “I don’t just like you. I love you and I want you to be my Valentine!”

At this point, Stephanie feared that she had a stalker on her hands. She wanted to end this harrassment once and for all, so she sent an angry reply.

“Look, whoever you are, I’m not interested!” she wrote. “How could you be in love with me. You’ve probably never even met me. You’re obviously some sad, lonely, ugly, disgusting, repulsive loser who has too much time on his hands. Get this into your thick head, you creep: I don’t like you. I hate you and I will never be your Valentine!”

Then, 30 seconds later she received another message.

“We’ll see about that!” it read. “When I come to your house tonight, I’ll make you my Valentine!”

Stephanie was terrified. Her parents were out of town and they wouldn’t be back for days. She called her friend Tracy and told her about the disturbing messages. Tracy offered to come over that night and keep her company. She said she would bring her brother Jake with her.

“Jake owns a rifle and he often goes hunting with my dad,” she said. “He’s a crack shot. If anything happens, he’ll be able to protect us.”

That evening, just as it was growing dark, Tracy and her brother finally arrived. Stephanie was overjoyed to see them and ushered them inside. They turned off all the lights in the house and made sure all the doors and windows were securely locked. Jake crouched down in the darkened hallway, his trusty rifle by his side. He positioned himself directly opposite the front door and aimed his rifle, ready to shoot anyone who tried to get in.

“You girls better wait upstairs,” he said. “Don’t worry about a thing. If this jerk turns up, he’ll have to get through me first.”

Tracy and Stephanie ran up the stairs and barricaded themselves in the bedroom. Sitting in the darkness, they passed the time by playing games on Tracy’s phone.

Suddenly, they heard the sound of the front door opening.

Stephanie and Tracy sat on the bed, too scared to say a word. Their hearts were beating fast and they were almost afraid to breathe. The tension was unbearable.

After a while, they heard a soft voice outside the bedroom door, whispering, “Stephanie? Stephanie?”

The girls were clutching each other, trembling in fear.

Stephanie struggled to speak. “Is… Is he dead?” she whispered.

Suddenly the door burst open and a dark figure stepped into the room. Tracy turned on the flashlight and shined it in the figure’s face. It was an old man with wrinkled skin, a bald head and a long white beard.

Then, he pulled out a meat cleaver and with one mighty swing, he sliced off Tracy’s head. Stephanie felt her friend’s blood splash against her cheek. She screamed in horror and fell to her knees.

The man raised the cleaver above his head again and brought it crashing down, splitting Stepahie’s head in two.

“Because you’re my Valentine,” he replied.

(iscareyoutodeath says: Since it’s Valentines Day, here’s a little story… Will You Be My Valentine? Hope it gets posted. You can remove the r### part if you want and change it to he killed her.)

(Scaryforkids says: I did a lot of work on this because I liked your original idea and I thought it had a lot of potential. However, I think it needs to be developed more… build up the plot more… add more tension… etc. Also, yeah, I had to change the r### bit to killed. LOL)