The Turd is a sad story about a boy that falls in love with a girl who hates him, treats him like dirt and calls him horrible names. 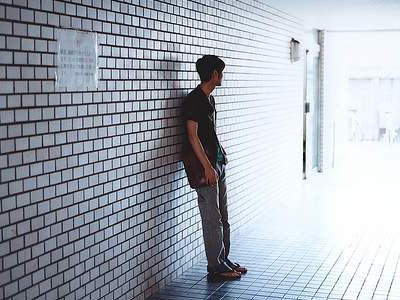 Once upon a time, there was a boy named Bruno. He really loved this girl named Natasha. At school, he followed her to all of her classes and always tried to sit beside her. Whenever the other kids in school made fun of her or talked behind her back, Bruno would defend her.

One day, Bruno was standing next to his locker when he saw Natasha walking down the corridor. He just looked at her, that’s all he did.

She turned and saw him looking at her and said, “WHAT ARE YOU LOOKING AT YOU UGLY TURD?”

Heartbroken, Bruno ran out of the school and didn’t come back. The next morning, he didn’t turn up for classes. Natasha didn’t care that he was gone. She barely even noticed his absence and acted like everything was just normal.

About 6 weeks later, Bruno turned up at school, but he wasn’t the same. His friends noticed a big change in him. He was unusually quiet and always had a funny look in his eyes. Also, he always sat alone.

Natasha saw him sitting by himself in the cafeteria and said, “LOOK EVERYONE! THE TURD’S BACK!”

Bruno just sat there as everyone laughed and laughed at him. His eyes started to water, so he covered his face.

All Bruno could hear was Natasha saying, “AAAW! IS THE LITTLE TURD GONNA CRY? HAHAHAHAHA…”

The next day, the whole school gathered to go assembly. Bruno stayed back in his classroom to have some private time. About 5 minutes later, Natasha walked into the classroom. She was crying.

Bruno decided to ask what was wrong

Bruno sat back down.

Suddenly, a crazed man with a gun ran through the door. He saw Natasha and pointed the gun at her.

“I just escaped from the prison for the criminally insane!” he shouted. “I need money to buy a bus ticket to Mexico! Empty your pockets!”

Shaking like a leaf, Natasha, emptied everything out of her pockets but she had no money. The man grew angry and was about to pull the trigger, when Bruno suddenly tackled him and wrestled him to the ground. They started to fight for the gun.

Suddenly, a shot rang out.

The man struggled to his feet and escaped through the open door. Natasha looked down and saw Bruno lying on the floor in a pool of blood.

“Why did you do it?” she asked, tears streaming down her face. “Why did you save me after everything I said to you?”

As the life ebbed from his body, Bruno looked up at her and replied, “Why do you care why I did it? I’m just a turd.”

With that, Bruno closed his eyes and died.