Tanning Lotion is an urban legend about a woman who uses tanning booths and sunbeds to get the darkest tan possible. 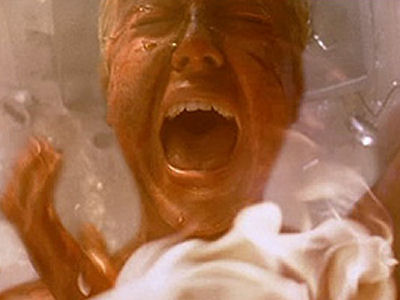 There was a young woman who was getting married to the man of her dreams. Her wedding day was approaching fast and she wanted to look her very best. People were always telling her that she looked very pale, so she was determined to get a good tan before the wedding.

The woman went to a tanning salon near her house and tried to book an hour on the sunbed. The staff at the salon told her that, for her own safety, she could only tan for thirty minutes at a time. After the session, she looked in the mirror and found that her skin wasn’t any darker.

When she attempted to make an appointment for another thirty minutes on the tanning bed the next day, the staff informed her that she could only tan twice a week. After her second session, the woman still wasn’t satisfied with the result.

Fearing that, at this rate, she would never have a proper tan, the woman came up with a cunning plan. If the salon could only give her thirty minutes, then she would book appointments at every tanning salon in the city, one after the other.

She spent the next four days going from one tanning salon to another, lying on sunbed after sunbed. Even though her skin was beginning to get a little bit darker, she was worried that it wouldn’t be brown enough by the time her wedding day arrived.

She went to a shop and bought a special brand of tanning lotion. This particular lotion was only supposed to be used by people who had a rare skin condition. The tanning lotion was designed to increase the skin’s sensitivity to light.

She hoped that this would help her skin tan to a lovely golden brown. She slathered the tanning lotion all over her body, letting it soak in. Then she set off for her tanning bed appointments.

Later that day, at the tanning salon, the staff noticed the smell of burning in the air. When they went to investigate, they were horrified to find one of the tanning beds was on fire. After putting out the flames, all that was left on the tanning bed was the charred corspe of the unfortunate woman.

When the autopsy was performed, the coroner discovered that the woman’s internal organs had been cooked from the inside out. By combining the tanning lotion and the sunbed, she had literally cooked herself alive.