The Screaming Tunnel in Niagara Falls is famous for its true ghost story about a young girl who burned to death in the middle of the tunnel. 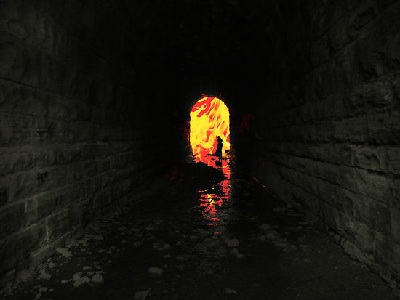 There is a tunnel in Niagara Falls, Ontario, that locals call The Screaming Tunnel. It is located just under the old railroad tracks near Warner Road.

As the story goes, over a century ago, a family lived in a large farm house that stood in the field at the top of the hill, close to the tunnel.

One fateful night, the farm house caught fire. As flames raged through the building, the air was shattered by a young girl’s screams. The family were trapped in the house and they burned to death.

When the fire was eventually put out and the firefighters were sifting through the wreckage, they found the charred bodies of all of the family members except for the daughter.

Searching the surrounding area, they found the burned corpse of the young girl inside the tunnel at the bottom of the hill. They assumed that she had fled from the house, her clothing engulfed in flames, running into the tunnel in a futile attempt to extinguish her burning garments. Overcome by the flames, she must have collapsed and died alone in its depths. But they could never figure out what had caused the fire in the first place.

Some say that the fire was started by a local butcher who had become obsessed with the young girl. Wearing a mask, he sneaked up to the farm house in the middle of the night and set it on fire in an attempt to kidnap her. When she tried to escape through the tunnel, he burned her alive.

Others say that it was the girl’s own father who murdered her. They claim he became mentally deranged when he found out that he had lost custody of his children in a bitter custody battle with his wife. In a fit of anger, he lit the fire and when his daughter escaped the flames, he chased her down burned her to death.

Whoever her killer was, everyone agrees that the ghost of the young girl still haunts the tunnel. According to the legend, if you stand in the middle of the tunnel and light a match, she will blow it out immediately and you will hear the agonized death screams of the burning girl. The middle of the tunnel is unusually cold and people who have visited the tunnel always get the feeling that they are being watched.

One person who visited the screaming tunnel wrote: “I’m from Niagara Falls and yeah the stories true. My dad was telling me him and some friends went to the tunnel when they were kids. The tunnel is pitch black and you cant see the exit when you go in. His friend lit a match and it blew out instantly, and he heard the girl screaming. He also heard a man’s voice yelling. The reason the fire started was that a man had broken into the house while the family was sleeping, and set the house on fire, and followed the girl into the tunnel and set her on fire. The reason a “match” will instantly be blown out in the tunnel is because the man who set the house on fire used a match to start the fire.”

Another person wrote: “As far as the match story goes, we attempted it 3 times and the match did blow out, but we did not hear any screaming.”

Interesting fact: A scene from the 1983 Stephen King horror movie The Dead Zone was filmed in the screaming tunnel.