The Cheap House is a scary story about a young married couple who purchase a house for a very low price, but they learn that it comes with a ghostly tenant included in the deal. 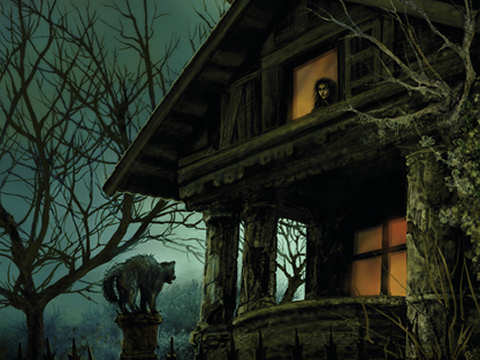 My wife and I bought a house. We got it at a very low price. At the time, I didn’t think it was strange and we were just glad to save so much money, but now I understand why it was so cheap. When my wife and I moved first into the house, we did some repairs and everything seemed to be fine. However, soon strange things began to happen.

One night, my wife and I were asleep in the bedroom when we were suddenly awoken by a crashing noise. It sounded like something had fallen. We sat up in bed and listened, but there was no more noise. My wife was too scared to get up, but she gave me a kick under the blankets and told me to go and see what it was.

I reluctantly got up and took a look around the house, but all was quiet and there was no trace of anything that could have fallen. I went back up to the bedroom and tried to get back to sleep again.

After a few minutes, we heard the crashing noise again. This time, we knew it wasn’t our imagination. I got up and went from room to room, searching for something that could have caused the noise. Everything was in its proper place and there was nothing on the floor that could have created such a racket.

I was about to go back to sleep, when I felt a cold wind on my bare feet. I thought perhaps my wife had left a window open, so I opened the curtains. What I saw through the window almost made me jump out of my skin!

Standing in the middle of the darkened street, staring directly at me with large white eyes, was a nasty old lady! Her face was so terrible that she looked as if she had just died a few weeks ago!

Just then, I heard my wife crying out for me and her voice was shaking with fear. I ran upstairs to the bedroom and found my wife crying hysterically and mumbling over and over that she wanted to leave! She had looked out the window and seen the terrible old woman too.

I grabbed a hammer and raced downstairs again. I wanted to go out into the street and find out what was going on. When I got outside, I walked up and down and round and round in circles, but there was no sign of the terrible old woman. Not even a trace!

I returned to the house and tried to comfort my wife somehow, but that night we couldn’t relax enough to fall asleep again.

The next day, we attempted to reassure ourselves a little, but when night came, my wife and I were both on edge. We couldn’t sleep, so we sat in the living room, watching TV. For a while, everything was fine, then all of a sudden, the electricity went out in the whole house.

I went into the hall to check the fuse box, but all of the fuses seemed to be turned on. I decided to go into the kitchen and fetch some candles and a flashlight. On the way, I poked my head into the living room and in the darkness, I could make out the silhouette of my wife, sitting on the couch. I told her that everything was fine and I would bring back some candles.

When I walked into the kitchen, I was horrified to see a figure standing there in the darkness. I opened a drawer and grabbed the flashlight. When I turned it on, I almost fainted! It was my wife.

I had a bad feeling in the pit of my stomach. I took the flashlight and told my wife to wait in the kitchen while I tried to figure out who I had seen in the living room. I was praying that no one was there. My wife didn’t argue with me, because she knew that if see your doppelganger, it means you can die.

Fortunately, there was no one in the living room. As soon as we lit the candles and placed them on the mantlepiece, the electricity returned and the lights came back on! We blew out the candles and decided to go to bed, but we couldn’t sleep. After all, I had definitely seen something!

At this moment, I was just beginning to understand why we managed to get the house got so cheap. Obviously, the former owners knew about everything that was going on, but nobody informed us.

I don’t remember falling asleep that night, but when I woke up, the room was deathly cold. My wife had her back to me. She was still asleep, so I covered her with another blanket and went downstairs to have a cigarette.

When I walked into the kitchen, I saw my wife standing there with a cigarette in her mouth, puffing away. She asked me why I left her lying on the couch in the living room while I went up to bed. I told her I had no idea what she was talking about. Just a few seconds ago, I had tucked a blanket around her in the bedroom.

With a sense of creeping dread, we decided to go back up to the bedroom to check who was lurking up there. When we came to the bedroom door, I opened it quietly and peered inside. Oh my God, what do you think I saw there?

Lying in our bed, was the terrible old woman! My wife screamed, I gasped in horror and we rushed downstairs. Taking refuge in the living room, my wife told me to call the police.

I dialled the number for the local police station and when they answered the phone, I told them what was going on. They laughed at me for a while, then threatened me with a fine if I didn’t stop wasting their time.

I called a few of our friends and explained the situation. They came over and we all searched the house from top to bottom. We didn’t find anything suspicious. When our friends left, my wife informed me that she was leaving me and going to live with her mother. She told me she would come back when I had finished dealing with all this devilry and everything returned to normal.

I was left alone in the house. The first thing I decided to do was call the previous owners of the house. They told me that they knew nothing about it, but I could sense the anxiety in their voices. I realized that they were lying to me. As it turned out later, they were also victims of the house, as we were, but they couldn’t do anything about it, and just sold the house to us for a cheap price. The house clearly had a terrible history…

The next day, I called a priest. The moment he stepped over the threshold, he said that he sense and evil presence and advised me to move out of there immediately. I told him to do his job and not to give out useless advice. He sprinkled holy water around and blessed the house. Then he handed me a bill for his services and left.

Honestly, I really did not want to test his work that night, but I had no choice. I had nowhere else to go. I was terribly scared, so I bought myself a bottle of vodka for liquid courage.

That evening, I was sitting in the living room, watching TV and drinking my vodka. Gradually, I dozed off to sleep. In the middle of the night, I woke up because I desperately needed to go to the toilet. I went to the bathroom and stood there, doing my business, peeing all over the toilet seat, when I suddenly heard a loud knock at the front door.

I ran to the door and looked through the peephole. My wife was standing outside. She had come back to me. I let her in and tried to give her a hug, but she brushed right past me and went upstairs to sleep.

I was awoken in the morning by the phone ringing. When I answered it, my wife was on the other end. The first thing I asked her was, “Why are you calling me? Where are you?”

Her answer was, “At my mother’s, stupid!”

My hair almost turned white! I rushed out of the house, almost taking the door off its hinges as I went! When I got out onto the street, I turned to look at the house and there, in the upstairs window, was the terrible old woman, staring down at me!

I came to the conclusion that, after the priest did the consecration, the old woman had been forced out, but then she tricked me and I had accidentally invited her back in. I had witnessed so many inexplicable phenomena, I couldn’t take it anymore.

Soon, we put the house back on the market and managed to sell it to a new family. They bought it for around the same price we had paid for it, so despite everything that had happened, at least we didn’t lose any money.

Later I learned from the newspapers that the house had burned down. The whole family were killed in the fire. They died from smoke inhalation and their charred bodies were found huddled in a storeroom.

I think I know who they were in there hiding from…